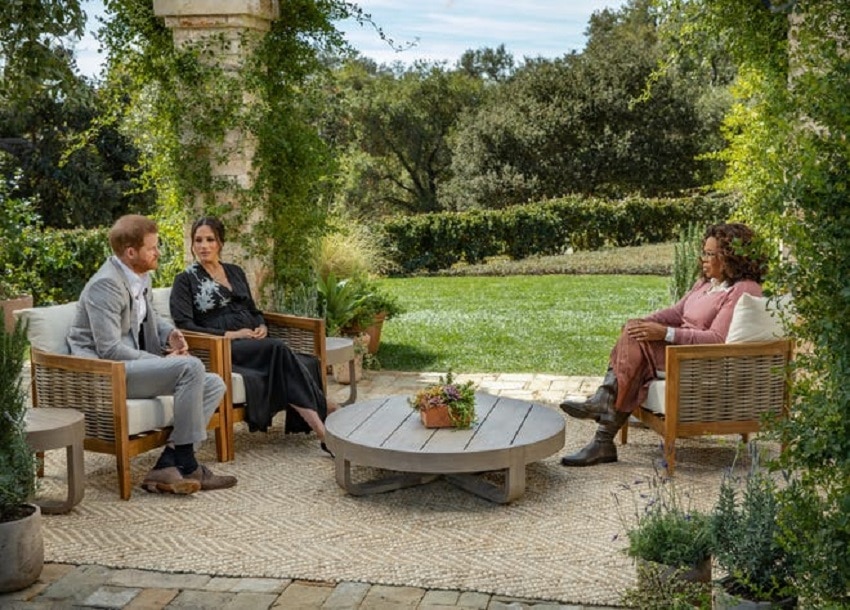 Harry and Meghan, whose interview with Oprah Winfrey on CBS last week unleashed a whirlwind of recriminations, announced their Archewell Foundation will back four charity organizations, including racial justice non-profit Color of Change, that they believe embody compassion, unify communities and drive systemic change.

The Duke and Duchess of Sussex took over the headlines in Britain and America this week when they told Winfrey last Sunday that they fled to America last year to escape racism in the British media and in his family, and because Meghan got no support from the palace when she became suicidal over the pressure of being in the royal family.

People are still reeling from the fallout. A post-interview YouGov poll in Britain found that both Harry and Meghan took big hits in their popularity ratings, now at their lowest ever level in the United Kingdom, YouGov said Friday.

However, the American pollster Morning Consult reported Friday that the interview boosted the ratings of the Sussexes. Meghan’ favorability among Americans who watched climbed 22 points from a pre-interview poll to 67%

But the royal show must go on, and the 94-year-old queen continues to lead the way via Zoom from Windsor Castle, where she is sheltering during the COVID-19 pandemic.

On Friday, Buckingham Palace released pictures of the queen speaking this week to British scientists, educators and schoolchildren via video conference to mark British Science Week and to celebrate the role of science, technology, engineering and math in British society.

The exchange featured her fond reminiscing about how she met the first human to travel into space, Russian cosmonaut Yuri Gagarin, when she invited him to Buckingham Palace in 1961 following his return to Earth. What was he like, she was asked.

“Russian,’’ she replied with a smile as her audience chuckled. “He didn’t speak English. He was fascinating, and I suppose being the first one it was particularly fascinating,’’ the queen said, according to the palace press release

It must have been terrifying to be the first one to go into space and not really know what might happen, said space scientist and broadcaster Maggie Aderin-Pocock.

“Well, yes – and if you could come back again. That’s very important!” Her Majesty said, displaying some of her dry humor.

She was also shown the latest updates from NASA’s Mars Perseverance mission and the recent meteorite discovery in the U.K. by a scientist from the Natural History Museum.

“I’m glad it didn’t hit anyone!” the queen said.

As a memento, she was presented with a set of Mars Perseverance rover face masks, sent from NASA headquarters to Windsor Castle. One of them is intended for her space-loving husband, Prince Philip, 99, who is still hospitalized in London.

The queen said nothing about what has preoccupied royals, courtiers, journalists and commentators, celebrities and politicians throughout the past week: The bombshell Harry & Meghan interview that aired on March 7.

But she wouldn’t. Her official statement, issued by the palace two days later, was measured and brief: Harry and Meghan are “much loved.” Their allegations of racism were “concerning” and are being taken seriously, although “recollections may vary” about who said what to whom. But it was a family matter, and will be dealt with privately behind closed doors. Move along, nothing to see here.

Harry’s father, Prince Charles, had nothing to say either when he visited a London church on Tuesday for a long-scheduled engagement, staying mum when he was asked about the interview by reporters.

Harry’s brother, Prince William, did have something to say when he visited a London school on Thursday and was asked by a reporter if his family is racist. “We’re very much not a racist family,” he declared, looking daggers over his face mask at the questioner.

Harry and Meghan, now living in Santa Barbara County, California, have been building their new non-profit foundation Archewell, through which they intend to carry out most of their charitable activities going forward.

The causes they have chosen to support so far include:

Color of Change, identified as the largest online racial justice organization in the U.S.

The PressPad Charitable Foundation, a U.K.-based organization working to ensure greater diversity in the media by providing grants, training and and support to help lower financial barriers for young people who want to become journalists.